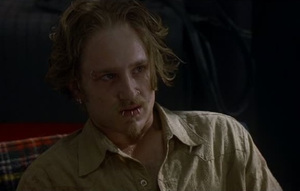 It’s time to get acquainted with the second of Frank Castle’s new neighbors in The Punisher, the one who suffers the most serious consequences of the vigilante’s presence : Spitter Dave, played by Ben Foster. In the movie, he is a nice young man whose face is covered in piercings. First he distrusts Frank because he thinks he’s a serial killer (which isn’t so bad, by the way), then he befriends him, and when Quentin Glass tortures him by ripping out his facial piercings one by one, he doesn’t betray his new friend and shows some courage in the operation. The torture scene is straight out of the comics, even though the author is different, and Dave’s story is similar to the one in the movie. Let’s look at it together.

Little is known about Dave, except that in his quest to be as unique as possible, he rejected society and insisted that all spacklers call him Dave. He covered his face with piercings and kept inventing new tricks, like hanging giant magnets from his nose rings. He lived in a small apartment in New York, where met two other outcasts, Mr. Bampo and Joan; when a new neighbor, John Smith, joined the group, he tried to befriend him as well, but in vain. It was still going on, until Joan knocked on his door for help, as John was badly injured: Dave moved closer and saw the black shirt with the white skull and crossbones that his neighbor was wearing and immediately recognized him as the Punisher. He told Joan who he was and ordered her not to call an ambulance or the police because he was wanted: They have to pretend to be cool and not tell anyone about him. Unfortunately, as soon as two cops knocked on his door, Spacker Dave snapped, realized they were just thugs in suits, and yelled that he wouldn’t tell them about the Punisher, immediately blowing his cover. The two thugs who worked for Ma’ Gnucci took him and started torturing him. They ripped one piercing after another from his face, leaving a bloody mess, but despite this painful experience, Dave didn’t betray Joan or The Punisher and kept his mouth shut. Finally helping Joan, the Punisher came in and killed the two thugs with a knife, then had a doctor friend called to the scene to tend to him and Dave as well. Dave’s face was completely covered with bandages, and even after his recovery he decided to keep the bandages on because they helped him express his individuality and personality. He then immediately informed Mr. Bumpo of the true identity of their neighbor and that his life was in danger due to his presence. The punisher frowned his eyebrows, but he understood.

After a fierce battle with the Russians, who razed almost all of the apartments to the ground, the Punisher left the building, but shortly thereafter he gave Dave, Joan, and Bumpo each a pile of money to thank them for their help. At first, Spacker Dave didn’t know what to do with his role until he realized that many kids like him started wearing bandages on their faces, and even started calling themselves Spacker: This expression of uniqueness was gone, so he must have found something else with . He removed the link and used the money to create a new social network inspired by his adventures with The Punisher : Super Spotter, where people were invited to share photos and stories of their encounters with superheroes. When Dave saw his old friend Punisher on the street, he began to hunt him down, hoping to form a team, much to the annoyance of the vigilante. And when Daredevil, Spider-Man and Wolverine showed up to stop Punisher, Dave’s goal seemed within reach. He began to move around the heroes and gather material for his social network, not wanting to be distracted by the Punisher: Though outnumbered and underarmed, the vigilantes used Dave’s intervention to force the heroes to attack each other, and escaped by taking advantage of the ensuing chaos. The trio were rather unhappy with the result, but at least Dave had plenty of quality material for Super Spotter. Realizing that the Punisher was a gold mine for encounters with other superhumans, he continued to follow him…. But this time he encountered the Hulk, who didn’t have the same self-control as the previous heroes. During the fight, the Hulk also hit Dave and broke his neck without him noticing. As a result, Dave became a quadriplegic. but lost none of his enthusiasm and was still fascinated by all things superhero. He just needed a new idea. 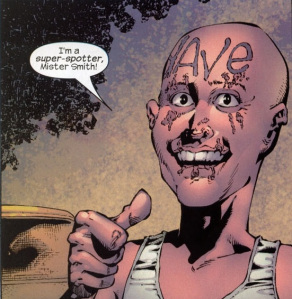 Dave, formerly Spacker Dave, is a fun and friendly guy, always willing to make new friends, eager to find a unique character in a giant world. Although he doesn’t really know how to defend himself in stressful situations, he is very loyal to his friends and would never betray them. The originator of the Spakwagon movement and inventor of the Super Spotter, Dave is always finding new ideas to express himself…. and more or less willingly encourages others to follow his lead.

How do you load…