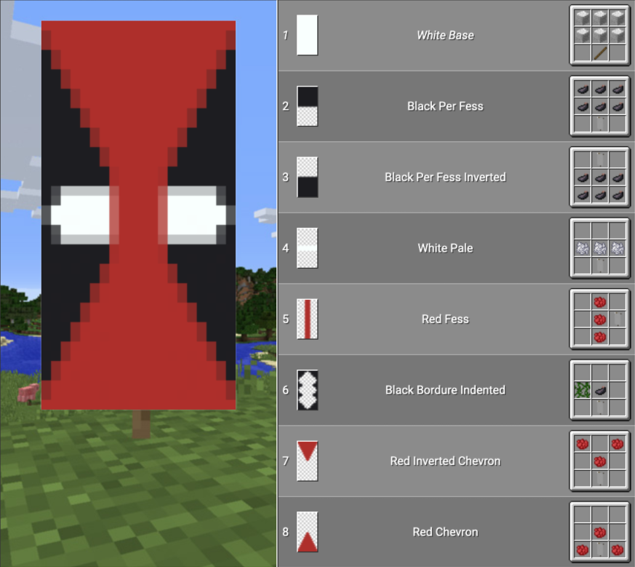 Minecraft is one of the rare games with an endless universe where you can build and achieve anything you want. This game, which is constantly adding new features, themes and items, has many fans. Another eye-catching feature is banners. Let’s take a look at what these banners do, how they are made and which ones you can choose. That’s why we review the best banner designs Minecraft for you. Top 10 coolest banners with different styles and contents are listed below for you to use in Minecraft. Let’s take a look together.

There are hundreds of different types of blocks in Minecraft. Generally these are all used for different shapes. Some of these blocks are for crafting and some for decoration. Customized banners are made from these hundreds of blocks. Banners have been added to Minecraft with the 1.8 patch. Previously it was possible to use them in double or single colors. You can use 16 colors and only six different patterns to design a cool banner in Minecraft. The most common use of banners is to decorate houses and label places visited, but they can be designed for different purposes.

Deadpool, the immortal and troll superhero of the Marvel universe, has come to spice up your Minecraft world. If you’re a fan of Marvel superheroes, this episode might interest you. Imagine building a Stark Tower for the Avengers and creating a separate banner for each hero, which sounds great. Although the construction of Deadpool is quite simple, you can easily obtain the materials. Most Marvel fans are also Deadpool fans. And if you’re here, you like Minecraft too. Why not combine these two wonderful worlds?

Doctor Who fans immediately recognized the Tardis. Your Minecraft universe may need a cabin that can move in space and time. For those who don’t know, Doctor Who is one of the most popular science fiction television series. It has millions of fans around the world. The main character of the series Doctor Who uses the Tardis to move through space and time. You can see the features of this banner, which was simply created by someone who is a Doctor Who fan.

If you have extra Lapis Lazuli why not consider designing this cool banner in your Minecraft world? We think it’s worth a try! There is nothing more enjoyable than living this fantastic adventure in the Minecraft universe.

Next up is a cool banner that Star Wars fans use very often in Minecraft. Your Minecraft character moves with the force. Perhaps you have built yourself a Jedi temple. At this point, Saber Laser is exactly the banner you should use. You can start by using 6 white wool and a stick in total. In addition, you can complete the construction you have started simply by using only two paints, black and purple. If you are a Star Wars fan, you should definitely try this. May the force be with you!

Minecraft game is considered a meme in itself. Naturally, many figures that have become memes on the internet can be used as banners. How about recreating the most popular of them, Pepe the Frog, as a banner in Minecraft? You need to add an ink sac and moss to the banner you created with 6 white wool. Then you can complete the construction of the banner in a very simple way by making the mouth part with the red rose. If you are a meme lover, I think this is for you. Would you like to try it?

Pokemon is almost one of the most popular games and series around the world. When we think of the customizable world of Minecraft, the world of Pokemon becomes very attractive. In Minecraft, you can see 3D Pokemon wandering in grass, mountains and caves through some mods. After creating such an atmosphere, the only thing left is the Pokeball Banner. This banner consists of seven layers and requires white wool, rose red, ink sac and bonemeal to produce to design.

If you’ve been a Pokemon fan since you were little, why not include it in the vast universe of Minecraft? Come on try it now!

You have tamed a fox that will protect your home and you have made it a hut and live next to you. Create a beautiful Fox Banner for your next step. It consists of 6 layers in total and the materials needed are extremely easy to find.

One of Minecraft’s favorite animals are ducks. If you have a duck farm next to your house, this is the banner you should try. Most Minecraft players like to create designs decoratively cool banners. Everyone living in your Minecraft world will adore this cute duck!

Welcome to the world of hackers. If you are creating your own matrix universe in Minecraft, you may have found the banner you need. You need 3 paints to make this banner. These are Black Dye, Lime Dye and Green Dye. With this cool banner design you can start building your mysterious house with hidden traps in Minecraft world.

If you want to survive and progress in Minecraft, you need animal farms. If you want to add cool decorative decorations to your animal farms, you may need these banners in Minecraft. You can also use various banners such as chicken farm, sheep, horse and pig. All materials used in this poster are easy to find except the Creeper Head. Let’s make this cute banner next to your house now!

People who come to explore your area in Minecraft will be terrified when they see this banner. You may have built an island like Tortuga in Pirates of the Caribbean. To add fear to your island and represent your pirate crew, you can hang the banner at the entrance of the island and intimidate your enemies. It is extremely fun to make and consists of easily obtainable materials. This banner, which looks quite gothic and creepy, is very exotic in our opinion. We have no doubt that it will look great in your home.

Even though it is very difficult, you may want to prepare a souvenir banner if you managed to kill the Ender Dragon. This banner consists of 13 layers and is very difficult to make. Especially finding Creeper Head and Wither Skeleton Head can take a lot of time.

With the latest updates, the loom counter has been added to the game. In this way, dozens of new patterns and designs have emerged that you can choose from. You can add all the patterns you imagine to your Minecraft world with paint, the right materials and patterns. Banner making is a very demanding and sometimes boring situation. We have listed the top 10 coolest banners in Minecraft for you. All of these banners appeal to different personalities and tastes. You may like more than one. We have brought together banners containing fantasy, game, series or many other things for you. If you like and use banners, you can share them with us. We are always open to new ideas